X-Posted from article by Susan Farley for The New York Times: NY/Region published: March 23, 2009
Most of the Seventh Grade Will Be at the Commitment Ceremony 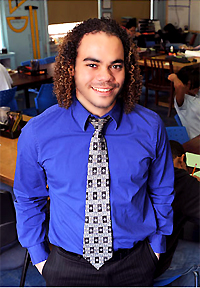 Sometimes the best news is that a story makes no news.

Chance Nalley, a teacher at Columbia Secondary School, said students kept asking if they were invited to his commitment ceremony. At last he said yes.

In the fall of 2008, the supporters of Proposition 8, a ballot initiative meant to ban gay marriage in the state of California, fell on a lucky break: video of first graders whose class parents had arranged for them a trip to city hall, where they celebrated their female teacher’s marriage to another woman, a ceremony over which the mayor of San Francisco presided. Gay-marriage opponents cried indoctrination, and the ensuing controversy provoked so much outrage that it has been considered important in squashing opposition to the ban. (The California Supreme Court is currently weighing the constitutionality of the proposition.)

In Harlem a week ago, a 32-year-old math teacher handed out slips of paper inviting the entire seventh grade of Columbia Secondary School to his upcoming ceremony, where, the names on the invitation made clear, he’d be celebrating his commitment to another man. The teacher, Chance Nalley, rarely wastes an instructional opportunity but said that, in this particular instance, he wasn’t trying to make an educational statement.

“They kept asking if they were invited,” he said of his students at Columbia, a selective public school that specializes in math, science and engineering. “Originally, I said no. But when I found a venue that turned out to be big enough I said, ‘O.K., you can come.’ I invited their parents, too.”

Many thanks to Ann Herendeen who is (among many other things) the out bisexual author of “Phyllida and the Brotherhood of Philander” a witty & wise bisexual Regency romance novel (with a positive ‘happily ever after’ for all ending), who noticed and passed along the tip that “The New York Times learns the B word” on the BiRequest ListServ.